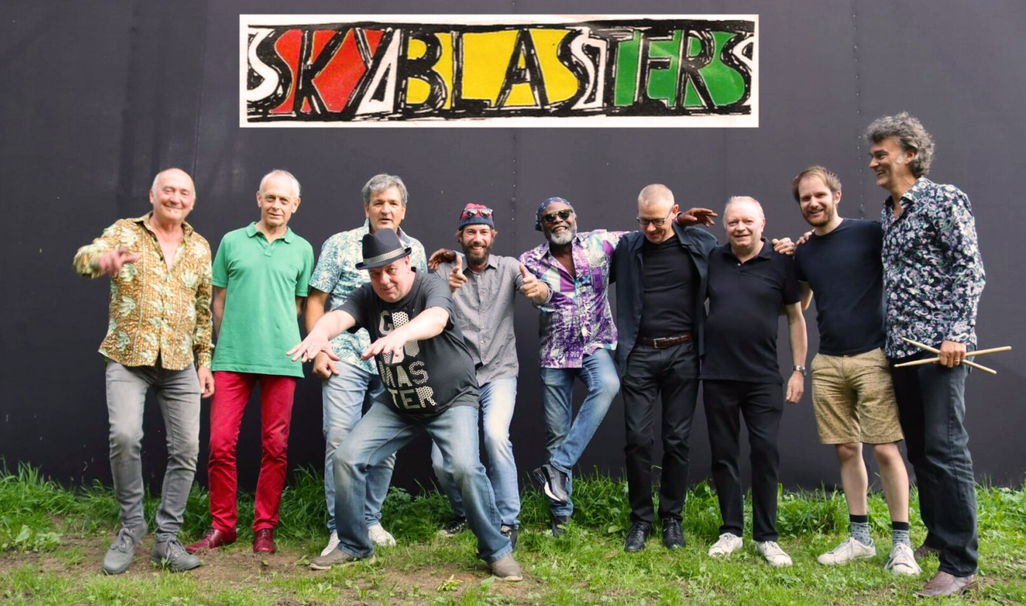 FINALLY! Yeah, that's something we've been hearing a few times lately... And indeed, our previous albums are finally available all over the net.
Cleaned up and digitally remasterd for the first time! So from now on you can enjoy new, great sounding versions of about everthing we've ever launched on vinyl and on cd. Included some previously unreleased recordings. This is how our promotor Luc Standaert told the news...

SKYBLASTERS is Belgium's oldest (°1984) and probably best-known reggae band ever.
In terms of recording and launching albums, their musical journey began in 1986 with the release of a live album that was recorded during a sold-out concert in the Vooruit in Ghent. It was released in May 1987 with the title 'The Dirty Dozen is Alive and Well', or simply: Skyblasters Live'. It made the band the first Belgian collective ever to release a live album as their debut.

In 1988 they launched Livin' In Limbo, the first studio album which included a reggae version of Ravell’s Bolero and went viral. In those days, viral ment something else: copies of the 12 inch version were actually sold all over the world…  Another year later there was Crossing the Line, including several radio hits. Each album was followed by a European tour.

These albums were available on CD as well as on vinyl, but never released digitally before. And well, that has recently changed. Since they never were digitally remastered, Johan Engels of Noloxbox, (who already engineered the album 30 Years Live - Acoustic Bootleg Power), analyzed the old recordings and made them sound up-to-date. The digital release makes the songs sound better then ever…

Luc Standaert of Cricket Hill Music, who earlier released the recent singles Just Another Day and Fallen in Love on the label A Music Harbour, made sure the complete collection came together in one profile, SKYBLASTERS (without The) on all important digital platforms.

Fans will be able to find nearly every recording of the band in one place.  For example on  Spotify, Apple Music and Deezer. At the end of September this year, a brand new single 'Stay With Me' will also be available.

SKYBLASTERS GO DIGITAL a new chapter to the musical story of the band. Meaning: it is therefore far from being written.

SKYBLASTERS is considered Belgium's all time legendary reggae-band! Back in the 80's and early 90's, this genuine band (formed at Gent) wrote Belgian musical history with the release of their live debut-album (something that hadn't been done before), two succesfull studio-albums, countless live performances and a few tours around Europe. In 1993 the band decided to pull the plug after five intense years. In 2005, after a brief but succesfull reunion tour on request of the fans, it became quiet again.

Up until 2013, when co-founder/drummer Patrick (pdw) De Witte sadly passed away and the remaining core members played acoustic versions at his memoral. It became the start of a new chapter in the bands history. They decided to take it back to the stage in loving memory of their friend (pdw). But not as expected. Drums were replaced by percussion and cajon, amps were banned and guitars came in their acoustic form. Gigs became all about the music in it's most pure and vulnerable format. Surprisingly the power never got lost and again on request of the fans, the band recorded a second live album to celebrate the 30th birthday of the first one, called ACOUSTIC POWER.

And well, as loyal as the band is to the fans, the next request became a new challenge... How about getting the band back together again in it's original shape, the full electric 'dirty dozen' that always has been alive and well....

Missing a few friends/bandmembers who crossed over, but constantly present in their hearts...

It's been a while ago since we've launched a single... Almost 15 years ago! Well, it happened recently... We dove into the studio with our old time friend Peter Gillis and recorded Just Another Day.

Thanks to Luc Standaertt, we had the opportunity to launch it on the label  A Music Harbour. Things went pretty fast... so we thought: let's get this one on the road, we'll manage to shoot a video later on.

Unfortunately, things went a bit different as planned...
Corona came in and well, the lock-down made it impossible to make a video. Or not? Indeed, we've made something ourselves from a distance... Hope you enjoy!

Still in strange times due to covid, we've managed to record a new single.  It's released on the A Music Harbour label and available on all platforms.

In other news: we've been nominated for best reggae song on radio

LDM (Music Awards 2021) in New York... Fingers crossed, the results will be anounced on July 30th.